This page lists the publications that Choi made. It will be edited and updated over time; thus, at the moment it may not be complete.

This was the very first textbook on Taekwondo that Choi produced. Written in Korean, the majority of the forms in the book are Karate forms. There are only 5 Changheon-yu forms in the book – one of which – called Unam – mysteriously disappears in later versions of Choi’s textbook.

Only two copies of this book are known to still exist. One of them has been scanned, and is freely available to view here: https://historyoftaekwondo.org/2015/04/10/1st-ever-taekwon-do-book/

This was the first English-language edition of Choi’s textbook on Taekwondo. The book has no ISBN – ISBNs did not exist at the time. Because of this – and because only later editions of the book were printed afterwards – copies of this book are hard to find and often expensive.

The book gives fascinating insights into the development of Taekwondo, as in the forms section of the book, 9 Karate forms are listed and described in detail, showing how during the twentieth century, Karate forms were gradually replaced in Taekwondo training with new Taekwondo forms.

This book was a manual used in the Republic of Korea Army for teaching Taekwondo. Choi’s name cannot be found anywhere in the book, but the fact that the book is so similar to Choi’s other textbooks, and the fact that very few people in Korea wrote anything like this around this time, means that it can only be Choi who produced it.

The book is in Korean. A copy of it has been scanned and made freely available to view here: https://historyoftaekwondo.org/2015/07/01/the-1966-rok-army-taekwon-do-manual/ 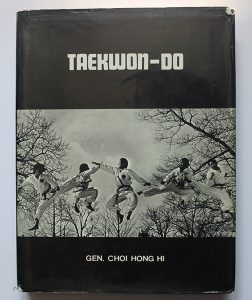 from the publishing page of the sixth edition: 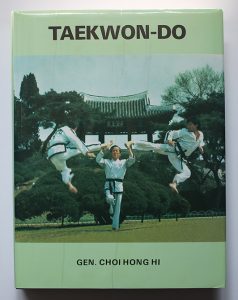 from the publishing page of the fifth edition:

It is generally still possible to find and buy copies of this edition of Choi’s textbook. However, because of its size, and because it’s very in-demand, they are often expensive, and can cost anywhere from £50 to £200.

Links to where you can buy a copy:

This entire publication has been scanned and made available in various locations online. The publication is out-of-print but still in high-demand. Because of this, and because of the size of the collection, complete sets of this encyclopaedia are very expensive.